Understanding when you should use certain gears while you’re driving is essential for your safety. It’s also pretty important for things like your fuel consumption.

The first thing to note is what exactly the gears will do. In the case of a lower gear, you’re going to get a lot more torque or grunt. You can’t put your revs too high when you’re in a low gear since it can put a lot of excess strain on the engine which is something that you should try to avoid.

It’s often best to choose your gear based on the situation that you are currently in. There are a lot of circumstances when driving in a low gear on your ATV is a good idea.

A lower gear is going to give you a lot more strength when you’re driving, so doing technically advanced movements like getting out of mud or getting through bumpy terrain is when you will want to use these gears.

Some examples of when it’s a good idea to use low gears include when you’re going to be pulling trailers that may be a little heavy, or when you’re moving rather slowly. It’s also handy for rocky or muddy grounds and for when you need a lot of braking power on your way down steeper slopes.

Naturally, there are disadvantages to using lower gears. For instance, you will have a much harder time getting up to higher speeds. Your ATV will also eat up more fuel when it’s in a lower gear too, which is never ideal. Keep reading, ATVA Online has more details for you below. 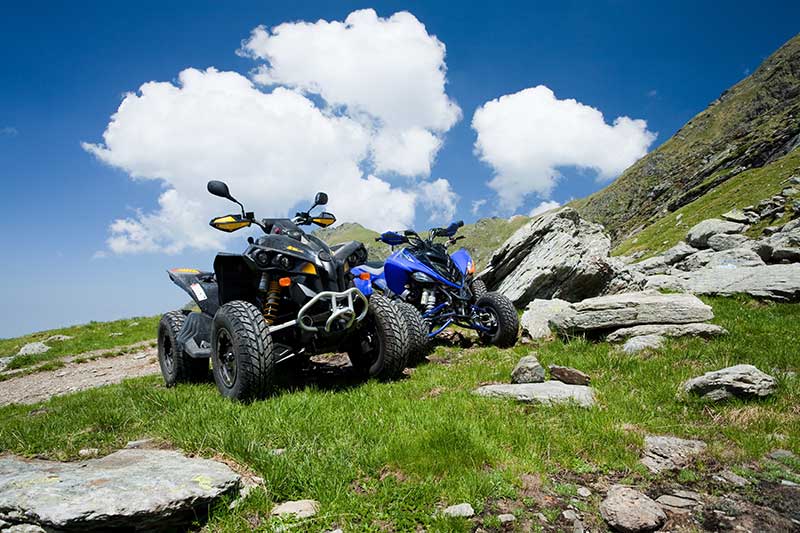 When should you drive in high gear

On the other hand, there are also a number of situations when driving in a higher gear is a much better idea. First of all, it’s important to note that you will get a lot more speed when you’re driving in higher gears, so you can also get your revs higher up.

It’s best not to go at slower speeds when you’re traveling in a higher gear since this can cause some problems for parts inside of your vehicle.

In general, it’s actually possible to keep your car in high gears a lot of the time when you have an automatic vehicle. Of course, you don’t want to keep your ATV in a high gear if you are planning on traveling at a slow speed.

High gears are best for circumstances where you intend to travel at much faster speeds. It’s also a good idea to travel in higher gears when the terrain is simple to maneuver – for instance, when you’re traveling on the road or you’re on a steady trail.

Some problems with higher gears include the fact that you can damage the belt on your vehicle when you’re using a high gear. It also won’t give you as much power when you’re moving at low speed. If you want power, you are better off with using a low gear.

In general, yes. You are usually able to travel at faster speeds when you are in a higher gear. Of course, the speed will vary between models. Some ATVs can travel a lot faster than others, regardless of the gear that you’re in.

As we’ve already mentioned, it’s a good idea to avoid trying to travel at high speeds when you’re in a low gear. For starters, you’re not going to achieve the kind of speed that you’re looking for when you’re traveling in a low gear. In addition to this, you may end up damaging the engine.

There are a few ways that you can make your ATV travel faster if you are struggling to reach high speeds even in high gears. For one, you can use better, more energy efficient fuel. You can also do a couple of upgrades to your ATV to make it travel faster. This includes adding a nitrous kit, upgrading the air filter, and adjusting the throttle limiter screw.

Naturally though, if you are finding that you’re traveling too slowly, it may be worth checking the gear you’re in. You may think that you’re in a high gear when you’re actually not. Also, try not to use higher gears for things where a lower gear will be more suitable.

Sure, you may think it’s a good idea to attempt to travel at 90 miles per hour through that muddy bog, but you’re probably just going to end up covering yourself in mud. Select a low gear instead – in these situations, you’ll probably travel faster anyway.