We’ve all felt that sinking feeling in our stomachs when we’re driving down the road and a warning light on the car dashboard flashes on. It usually means that we’re going to have to dig deep and pay, what will undoubtedly be, an expensive visit to a local garage.

While every light on your dashboard can potentially ruin your day when it flickers on, knowing what each of them means and how to address the problem that makes them switch themselves on is something that everyone who gets behind the wheel should be aware of.

And while each of them can create their own set of headaches, few have the ability to push your patience to its absolute limit in quite the same way as the alternator warning light does.

The reason an alternator warning will drive you to the point of distraction stems mainly from the fact there isn’t a dedicated warning light on your dashboard that lets you know that your alternator is starting to fail.

If the battery light on your dashboard springs into life it’s informing you that there’s a fault with your car’s electrical system and it could either a fault with your battery, a connection problem due to loose wires, or that the terminals and wires on your battery are too corroded to charge it properly, or it could also mean that there’s a problem with your alternator belt or your alternator.

Trying to figure out which it is can be infuriating, but luckily (or unluckily, depending on your point of view), there are other warning signs that your alternator is on its way out. As we’ve already mentioned the first indication that your alternator might be dying a slow death, or that it already failed is the battery warning light. If it lights up and doesn’t go out, that should alert you to the fact that there’s something wrong with your car’s electrical supply. But, a battery light by itself isn’t enough to point the finger directly at your alternator, because, again, as we’ve already said, it could be a number of other issues.

However, if your headlights begin to dim, even when they’re on full beam, or they start to flicker or intermittently begin to switch themselves on and off, that’s a pretty good sign that you might have an alternator issue as the headlight draw their power directly from your car’s electrical supply. And the part of your car’s motor that’s responsible for generating that electrical supply? That’s the alternator.

Stalling can also be caused by a bad alternator, as the alternator feeds a constant trickle of power to the spark plugs and ignition system of your car which helps to keep it running. Take either of those things out of the equation because the alternator isn’t supplying the charge that they both need, then your car will stall. If it keeps on stalling? There’s a good chance it’s because there’s something wrong with your alternator.

Then there are the interior electrical gremlins that have suddenly decided to appear and are beginning to make your life hell. If your car stereo, power windows, or door locks begin to take on a mind of their own and the lights on the dashboard begin to flash on and off at random it’s almost certainly because the power supply that feeds them is being interrupted.

However, the best indicator that your alternator has a problem is a dead battery. If your car won’t start, and none of the electrical systems are working when you get in, then your car’s battery has probably flatlined. At this point, you either charge the battery on your car and or remove and replace it, but if your car’s battery keeps losing its charge or running flat after you’ve charged or replaced it,  then it’s almost certainly your alternator that’s the problem.

But before you phone the garage and book your car in to have your alternator rebuilt or replaced, there’s one last thing you can do to confirm, beyond any shadow of a doubt that your alternator is the problem, and that’s by testing it after disconnecting the battery.

Disconnecting The Battery To Test The Alternator

While it isn’t a test that most mechanics would recommend (they’d advise you to test your alternator via the battery using a multimeter and battery terminal adapter – but we’ll tell you to do that after we’ve explained the cost-free method), it is possible to test your alternator by disconnecting your car’s battery.  And this is how to do it. 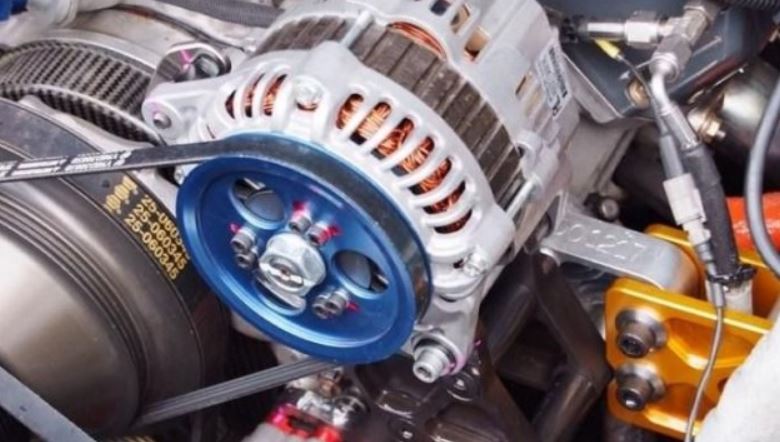 Remember, always disconnect the negative terminal first (the black one with the minus sign on it) first and the positive terminal (the red one with the plus sign on it) last. Before you disconnect the battery, we seriously recommend that you put a pair of heavy-duty, or work gloves on as it’s always better to be safe than sorry when you’re attempting to do anything involving electrical charge or electricity, as it can be inherently dangerous.

And if your battery or your alternator isn’t the issue, then it’s time to book your car into the garage and let the professionals diagnose and fix whatever the underlying problem with your car’s electrical supply is.

While this is an easy way to discover if your alternator is damaged, at fault, or broken, it isn’t completely risk-free. Disconnecting your car’s battery while the motor is running could damage the electrical systems on your car and isn’t without risk, as it involves an electrical workaround that isn’t strictly part of the mechanical rule book.

Is it a risk worth taking? If you don’t have the equipment to test your alternator properly, and you want to avoid the extra cost of having a mechanic test it for you, then it probably is. But that’s something that, at the end of the day, only you can decide.

Testing Your Alternator The Right Way

Like everything in life, there’s a right way and wrong way to test the alternator on your car to see if it’s working the way it should be.

Even though the disconnecting the battery while the motor is running method isn’t the wrong way, it isn’t the right way to do it either. Remember when we told you about the method that a mechanic would advise you to use earlier? Well, this is how you do it.

Connect a battery adapter to your battery, and then connect a multimeter to the battery adapter, making sure that you connect the positive cables to the adapter on the positive terminal (red connects to red) and the negative cable to the adapter on the negative terminal (black connects to black). Then, after making sure that all of the electrical systems in your car are switched off, turn the motor on.

While the motor is running, and with all of your car’s electrical systems turned off take a reading from the multimeter. If it reads fourteen volts, your alternator has passed the first part of the test.

Now it’s for the second and final part of the alternator test. With the adaptors and multimeter still connected to the battery of your car, and with the motor still running, turn all of the electrical systems inside your car. Then go and take another look at the multimeter. If it’s registering thirteen volts, congratulations, your alternator has passed with flying colors and it’s working the way it was meant to.

And even though the problem with your electrical system lies elsewhere and still needs to be addressed and repaired, at least you’ll know, after doing this test, that you can rule out your alternator as the cause of your car’s electrical woes.