Speed is the one thing we all want to feel when riding our ATVs over fields or bike tracks, isn’t it? We want to go coursing downhills, speeding up to the top of mounds, and feel the wind through our hair. For many of us, how fast our ATV is is a deciding factor when purchasing it. After all, no one wants to be trudging behind everyone else, do they?

The last one up the hill, the last one to the bottom, being overtaken by pedestrians or children is just embarrassing, lol! ATVA is here to answer your speed questions today! 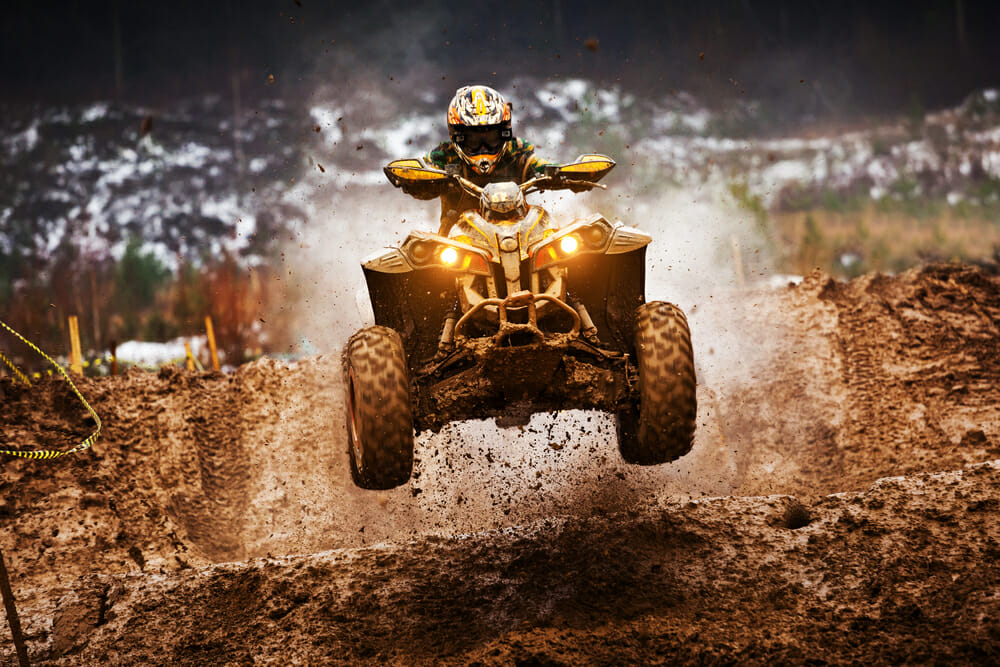 Well, there is no need to be embarrassed here! We will look at how fast ATVs will actually go, allowing you to make the right decision for yourself and enjoy some high but safe speeds on your ATV!

An ATV with a 90cc engine can reach speeds between 15-18mph. That speed is judged with an 80lb rider and a speed restrictor in place; however, you can access faster speeds on your 90cc ATV!By adjusting the throttle restrictor or removing the jumper, you can see speeds of up to 33mph! With further adjustments and modifications, some 90cc ATVs have reached speeds of 40mph or over! Not bad for that engine size, right?Remember, the speed of your ATV will depend on the weight of the rider, the drag, and the bike’s weight. 90cc ATVs are designed for younger and lighter riders, so the speed restrictor prevents faster speeds from being reached. If you are going to make adjustments to the 90cc ATV, be sure to safely and consult a professional if you have any concerns. As always, when younger riders are using an ATV, ensure they are wearing helmets, protective gear and are supervised at all times! The speed of your ATV will also vary depending on the brand and any speed restrictors in place, but as a general rule, you can expect roughly 15-18mph.

With a 70cc ATV, you can expect a top speed of up to 20mph, depending on the brand! Slightly faster than a 90cc ATV, the 70cc is another ATV designed with younger riders in mind. Few brands make a 70cc ATV, instead, they jump from 50cc to 110cc, but that doesn’t mean 70cc models are hard to come by! You can expect to see lesser-known brands or Chinese sellers making 70cc ATVs suitable for younger riders. The Kayo Fox and Apache Mini ATV are the most popular 70cc models on the market currently, offering speeds of up to 20mph. As with ATVs for younger riders, they tend to operate at lower speeds, but there is always room for modifications if you would like to increase the speed. Be sure that you check the maximum weight before purchasing a 70cc ATV and ensure that your child wears protective gear, a helmet and is supervised at all times when riding the ATV!

How fast does a Honda Four Wheeler go?

The fastest Honda four-wheeler is the Honda 450, which has a top speed of 74mph. That is the stock speed you can expect for an average-sized rider without making any adjustments to the ATV. The maximum speed of 74mph makes it one of the fastest ATVs on the market! Other Honda four-wheelers see speeds from 40-55mph, depending on the model. The range in speeds is affected by the engine size, weight of the driver, drag, and other factors. However, you can expect to enjoy fast speeds with a Honda ATV! These speeds are stock speeds, adjustments, or modifications to the ATV, such as changing the throttle or removing speed restrictors that often provide faster speeds. When making any adjustments, safety should be your top priority to ensure that the rider is safe at all times.

What is the fastest ATV?

ATVs with a 1000cc engine are the fastest, able to clock speeds of a whopping 186mph! These ATVs have often undergone modifications to achieve these impressive speeds, but generally, ATVs with a 1000cc engine can see around the 100mph mark as a stock top speed! The record for the fastest ATV is currently held by Terry Wilmeth, who achieved a crazy 196.19mph on a modified Yamaha ATV! While these speeds are impressive, safety must always be your top concern. Your stopping time will need to be increased at these speeds, and protective gear must be worn at all times to ensure your safety. Some ATV riders opt to add a speed clock to their ATVs to keep accurate track of their speeds. Whether you have a powerful 1000cc engine or a smaller, child-friendly ATV we looked at earlier, accurately tracking your speed will help ensure your safety and allow you to stop the ATV safely when required to do so.