Some do, and some don’t! As with many vehicles, you can get an automatic, semi-automatic, or manual ATV. ATVA Online talks about each one! 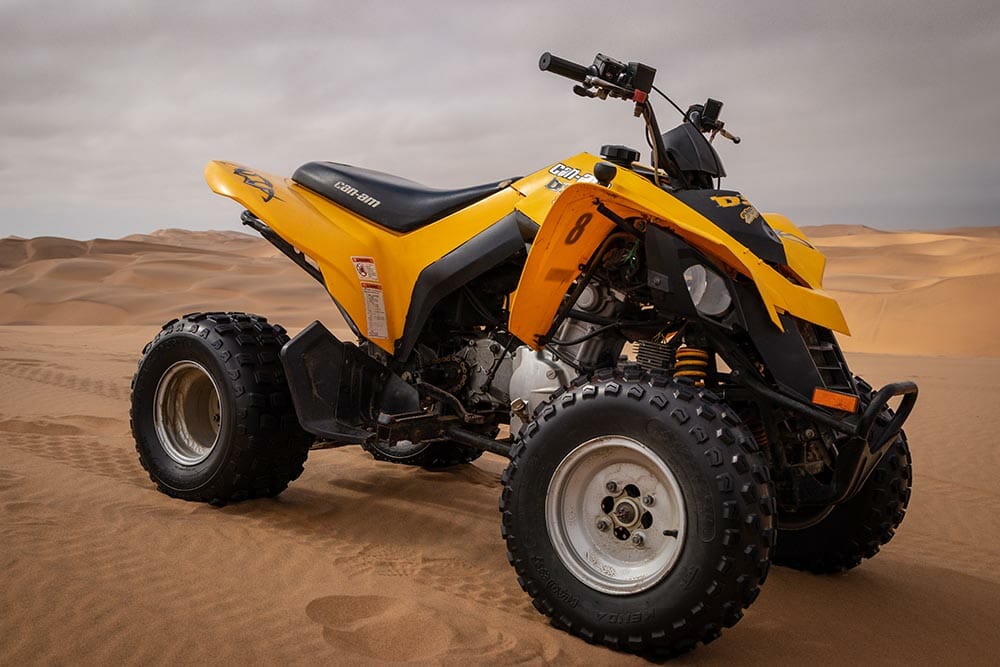 Manual ATVs, as you might expect, are the ones that feature a manually operated clutch, as well as a gear lever that allows you to switch between each one.

This allows you to have total control of what gear you’re driving in – great for rough terrain.

Semi-automatic ATVs offer you a win-win situation – you can change gears without needing to mess around with a clutch – all you have to do is hit a button and it switches for you automatically, but you have all the control over choice of gear.

Automatic ATVs, obviously, don’t feature any gears. Whether you have a Continuously Variable Transmission (CTV) that constantly changes, or a wet clutch transmission, you can go from a complete stop to the fastest speed with no change necessary.

You do need to put it into gear though, the same way you’d change the automatic car’s position from Park to Drive before heading off.

Are most ATVs automatic?

Nowadays, yes! As driving is, for many, easier in automatic, taking away one of the things you need to remember, manufacturers tend to go for automatic transmissions when designing all terrain vehicles in the modern age.

However, some manufacturers like Honda for instance have begun producing a semi-automatic ATV transmission system, wherein your gears are still changed automatically, but you don’t have to wiggle a stick mid-drive, just hit a button. 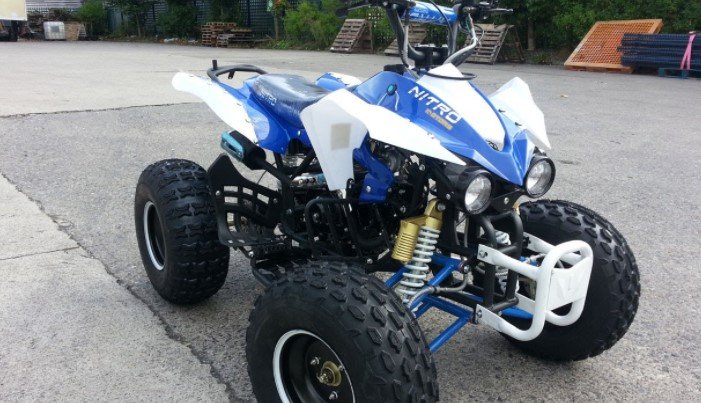 That being said, you can definitely get manual ATVs if you’re more of a hands-on driver.

It’s all about shopping around and trial and error, working out exactly what’s right for you, and then going from there.

Just because everyone else is driving an automatic, doesn’t mean you have to! Just do whatever you’re most comfortable with; there’s no standard you’re being held to… in fact, people would probably respect you for doing the “difficult” manual shifting!

How do you drive an ATV automatic?

Automatic ATVs are very similar to automatic cars, so their driving experiences are much the same! It’s quite easy: first things first, you start the engine, either by hitting a button, using a key or pulling a cord. Then, you’re ready to go! 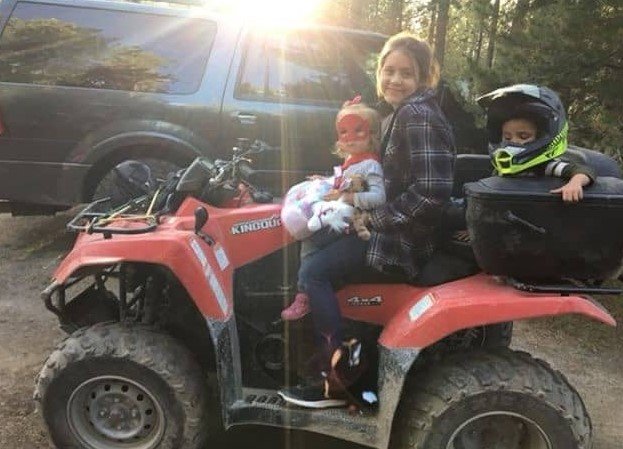 All you need to do is put the ATV into gear, which as we explained above is the same process as putting an automatic car into drive: just move your lever into the appropriate area (usually either Low or High) and then carefully push on the throttle.

Most throttles for ATVs tend to be located in the right hand grip, which you gently twist in order to move, as you would on a motorbike – others have a thumb lever that you can push forward, which is even easier!

Remember, even though it’s an automatic vehicle, you still need to be paying full attention to exactly what you’re doing, with your full focus on how fast the ATV is moving, as well as where the brakes are – always be ready to hit them!.

Other than that, it’s pretty much the same as driving a regular ATV. You turn and shift in much the same way, and hold the same posture and positioning. It’s all about practice – the more you ride, the better you’ll get at it.

How does a four wheeler transmission work?

With a semi-automatic however, you still need to switch between gears, but there isn’t a separate gear stick or clutch – they are combined into one handy gearstick, which disengages the transmission as you pick the gear most appropriate.

As you may have guessed, an automatic ATV does everything for you; you can change between neutral, low and high, but the transmission and the clutch are automatically adjusted for you continuously, with what is known as a Continuous Variable Transmission.

That is, unless you have a wet clutch ATV, with which there is only one speed to drive in at all times, and you’re only switching between driving forwards and backwards. This makes an excellent choice for all-terrain newbies just starting.

In any case, the transmission of an ATV works much the same as one in a car would.

How do you shift a semi automatic ATV?

Very simply, by using either the foot shifter or buttons to change gear! Shifting gears in an ATV is performed in much the same way as you would shift gears in a car, but automatics and semi-automatics are different.

There is no physical clutch, it’s all automatic, so there’s no need to enact clutch control. All you need to do is lay off the throttle completely and then shift either upwards or downwards in whatever method your ATV requires.

Make sure to close the throttle when you’re shifting gear, regardless of what anyone else says, as this stops your wheels from lifting and could save you from a very nasty accident.

Sure, you’ll slow down a little in the process, but that’s a whole lot better than injuring yourself or someone else!

Another good thing to practice is, like with a car, learning where the “engagement point” or “biting point” of your ATV is, which will help you switch smoothly and with less juddering, as well as stop you from stalling and stopping altogether.

One way to do this is to pay attention to the noises your engine makes, and become acquainted with them – it’s often possible to tell when it’s necessary to switch gears or lay off of your throttle just by the strained or stressed sounds it is making.

Do ATVs have a clutch?

Manual ATVs definitely do! As we’ve already mentioned, semi and fully automatic ATVs do the gear shifting for you, so there’s no need to worry about the clutch whatsoever. 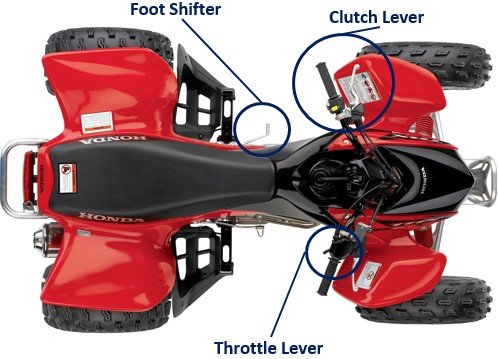 With a manual, however, the clutch is important for gear shifting.

Typically found in the form of a lever, positioned in the front of your left hand grip, you pull the lever in, in order to disengage the plates found in your transmission. You hold onto it the whole time you’re changing gear.

When the clutch is being held, it’s kind of like when a car is in neutral – no matter how much you rev the engine or try and accelerate, you’ll just be wasting gas! That ATV isn’t going anywhere until you’ve finished switching gears.

When you’re driving an automatic or semi automatic, the clutch is not a physical component – it’s integrated into the inner working sof your ATV, and therefore not something you’ll ever have to touch.

Both are equally as easy to drive depending on your preference, and both require a lot of work, practice and patience.

You’ll get there eventually, even if you’re already used to one particular style of driving. Don’t give up!

What is an automatic clutch ATV?

If you’re lucky enough to be driving an automatic ATV, this means your clutch is engaged and disengaged automatically. There isn’t a physical clutch lever for you to pull on, but you do have to switch gears yourself still.

For most models, the shift lever or foot pedal is also working at the same time as the clutch: it will first disengage for you, then get itself into your gear of choice.

Once you let go or move your foot, the clutch kicks back in and re-engages like magic.

Because the clutch of an automatic ATV is centrifugal, that means you don’t have to disengage it entirely in order to come to a complete halt.

This makes it perfect for junior riders or beginners, as it’s much easier to predict what the machine will do.

Both automatic and semi-automatic ATVs will usually feature an automatic clutch, but it’s worth consulting your user’s manual if you’re confused.

Every vehicle is different and will require a slightly customized driving technique!

If you’re having trouble figuring it out based on a diagram, try searching Youtube for a video tutorial. These visual guides can often be much easier to follow than a written or drawn instruction manual, as you can watch and follow along in real time.